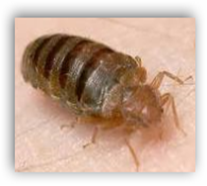 patients, what’s the likelihood of it spreading?  The areas where the patients lived were impoverished area of the city and thus the amount of bed bugs in the community was higher than would perhaps be expected in other areas.  All it takes though is for one bed bug to travel and we know that story as bed bugs have been in the new a lot lately.  The pdf link to the document can be found here and thanks to the folks over at Wired for finding this.

Back in July of 2010 a hospital went under lock down and was immediately fumigated with the ER room being where the bed bugs were found that came in with an ambulance.   A couple years ago a Fox news employee sued over bed bugs being found in the office.

This is puts a whole new focus on bed bugs for sure.  BD

In the June issue of the CDC journal Emerging Infectious Diseases, Christopher F. Lowe of the University of Toronto and Marc G. Romney of the University of British Columbia relay an observation they have made about bedbugs being carried by three patients who live on Vancouver’s Downtown Eastside — a neighborhood they describe as “an impoverished community in Vancouver with high rates of homelessness, poverty, HIV/AIDS, and injection drug use.”

The authors point out that several research groups have tried in the past to link bedbugs and disease transmission (of hepatitis, for instance) and have failed. They certainly have not proven transmission in this case. But they also say that there is a density of these two organisms in the area where the men live that make it more likely that bedbugs could be involved in diseases pingponging through the neighborhood. First, there’s the high density of bedbug presence, in 31 percent of Downtown Eastside residents. Second, there’s the high prevalence of MRSA, in 58 percent of the skin infections in the St. Paul’s ER. And third, there’s the previously recorded and persistent presence of VRE in in-patients at St. Paul’s.