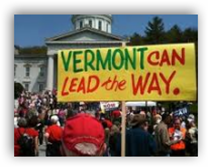 a good pilot for the rest of the country.  The financing is included in the bill and before 2014 there will be adjustments and amendments for sure as we don’t know exactly how it will play out simply because the world keeps changing all the time.

Green Mountain Care is the current name given to the program, so it will be interesting to watch and see how this moves along.  In the meantime a federal move towards a public plan would be nice too.  BD

(Reuters) - Vermont became the first state to lay the groundwork for single-payer health care on Thursday when its governor signed an ambitious bill aimed at establishing universal insurance coverage for all residents.

"This law recognizes an economic and fiscal imperative," Democratic Governor Peter Shumlin said as he signed the bill into law at the State House.

"We must control the growth in health care costs that are putting families at economic risk and making it harder for small employers to do business."

Legislators say the plan, approved by the Democratic controlled House and Senate this spring, aims to extend coverage to all 620,000 residents while containing soaring health care costs.

If the state secures one key federal waiver related to exchanges, Green Mountain Care could begin as early as 2014. Another waiver needed to implement the single-payer component under federal law would not be available until 2017.