WHO Classifies Mobile RF Radiation A Class 2B Cancer Causing Agent And There’s an App For Detection..Sort Of

There’s a cell phone radiation gauge that can be used on cell phones and it turns into an graph to show you how much radiation the phone is sending out.  It includes warnings to use the speakerphone, turn the phone and move it’s location.  The application is called tawkon.  This just might pick up some interest.  BD 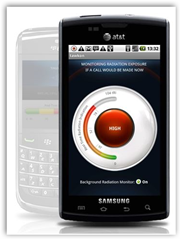 carcinogen, it might be time for Steve Jobs to reconsider his interest in tawkon, the cell phone radiation gauge he personally rejected from the iTunes App store.

Israel-based Tawkon Ltd. has devised an application that turns a smartphone's RF baseband processor data into an an easy-to-read graph that tells you roughly how much radiation your mobile phone is emitting. Though the developers had several "encouraging" meetings with Apple executives, and the app was already available both for BlackBerry and Android, the app was ultimately rejected by Apple CEO Steve Jobs.