Believe it or not the hospital admitting machine received many favorable comments, both from ER doctors and patients and it does make sense to have it all in one place

and not have to walk from department to department in a hospital.  If you have been admitted to a hospital you may have an idea of what I am talking about and the amount of time it takes.  The link below also has a video that explains more about the process and how it create a medical record chart at the same time, sound efficient to me.

At least when you look to compare the LinkedIn IPO, at least this has a tangible asset here and is not just a bunch of algorithms and $19 a share is a lot more affordable than $100+.    As the article mentions, the company has a lot of debt and was a spin off from Motorola back in 2004.  You can also find their chips in the Kindle reader from Amazon and Apple was a former big client as well.  Perhaps with diversifying a bit with items like the admitting machine developed in conjunction with Pounce technologies, will allow some growth in new directions with combining both chip and hardware Health IT technologies.  BD

on Thursday after cutting the price of its initial public offering.

Freescale, which was a spin-off from Motorola in 2004, provides embedded processing semiconductors and systems, including microcontrollers, single- and multi-core microprocessors, applications processors, and digital signal processors. Freescale is the largest supplier of engine system microcontrollers in the world. 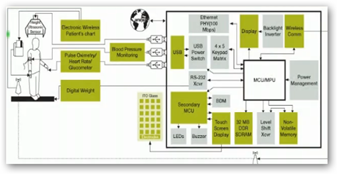 Freescale's IPO is being driven in part by $7.5 billion in debt accumulated in a 2006 leveraged buyout of the company. Since then, the company has struggled with its mountainous debt and saw its products being used less by the likes of Motorola, which has seen its cell phone sales sag over the years.