Human Genome Project: How A 23 Chromosomes Made An $800 Billion Economic Impact

As the article states we are just getting started as genomic information is being used in more areas than just healthcare, such as Law enforcement.  Last year 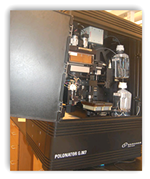 genetic research generated $67 Billion.  Drugs are now able to target patients with specific genetic qualities, aka personalized medicine.  I have been doing this blog for about 4 years now and when I go back and look at what I was writing then, it has changed tremendously in such a short time.  Back in 2008 George Church had his Polonator DNA Machine which looked like this.  BD

According to the report, the nascent genetic research industry generated $67 billion in U.S. economic output and created 310,000 jobs in 2010 alone. "We were surprised by just how large the economic impact had been," says Greg Lucier, CEO of Life Technologies (the foundation that sponsored Battelle's research). "What was even more interesting for me is that we're just getting going. The ability now to read genes quickly and economically is opening up entirely new vistas of opportunity."

And that nearly $800 billion is just the start of the money that will start rolling in as technology improves. "In my view, DNA sequencing will become as ubiquitous as the stethoscope in medicine," says Lucier. This could happen sooner rather than later; the same sequencing services that cost billions of dollars 10 years ago cost only thousands of dollars today.

The Human Genome Project: How 23 Chromosomes Made An $800 Billion Economic Impact | Fast Company