for HHS, but why not, they need it every where they can get for infrastructure.

Back in 2009 I suggested a Department of Algorithms or something along that line as if you can’t see an actual working visual model how does anyone know how it works and they don’t have to divulge any code to do this with proprietary system, just give a visual that others can use and and see.  We need some digital laws here soon anyway as the current process is getting to be such a mess anyway. This is also getting more confusing with 3rd party software algorithms come in to play when processing claims so you can read the link below and see how both Blue Cross and Med Solutions had some bad algorithms.

Again back to the laws they are so complex that even the judicial system needs some updated technology to get a correct interpretation, nobody wants the hot potato here.  If you don’t predict and simulate there will be tons of unintended consequences, and boy do we have tons of those.

We certify software from medical record vendors, so why do we not certify that he algorithms run by insurers and their agents are also performing correctly?

Here’s my post from back in 2009 with the suggestion of a Department of Algorithms and of course you need high powered technology to run it, so either rent some space from the DOE or bring in some IBMWatson servers and Congress needs that capability too.  It’s fine to have a rule out there but when you have companies that figure out immediately how to adjust their algorithms beyond what information is made available, they just adjust the algos, so I hope there’s more to this rule than printed text that will be hard to enforce with the technology the insurance carriers use for their calculations.  Must be good stuff as Medicare claims are all processed by contractors who are insurance carriers either direct or wholly owned subsidiaries of health insurers.

Just this week we have new algorithms for hospitals to attain with goals and incentives set.  They use a lot of software as a service for additional intelligence.

The medical loss ratios are not having such a good effect either, again the insurers have the highest levels of business intelligence and Health IT systems so they adjust and some regional business models can be changed in as little as 48 hours and rolled out, so how does a law or rule compete with that!  Even their own agents who sell the policies are getting screwed with less money, so talk about maybe biting the hand that feeds you or is it just they want all done on line without those folks? 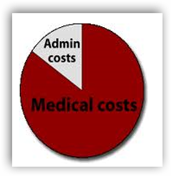 The data tentacles go out all over the place today and without having a visual and working model to see, how in the heck does anyone figure anything out?   This guy likes pay for performance and thinks everyone should be on it, but it doesn’t work for every type of job.

Ok so we are going to have rules for 10% and above, so how about this non sense of wanting members to play games on line to scrape more data?  I don’t get this with the games and it’s oxymoron as they want all of us active and moving around so how in the world is this going to do anything except tie one down to the computer more and when it comes to a choice of an Aetna or Humana game or WOW, guess what wins!  Its more algorithms to get data to sell and analyze so see it’s not about you living a healthier life.

It’s the algorithms for profit, rate increases, risk assessments and so forth and again audits (with technology) and a better grip on all of this is what it’s going to take and the “trust me” days are pretty much gone.  If you are interested in privacy,watch the video at the link below from Stanford, it will explain and open your eyes.  We need to do something better than text on paper any more in the digital era as it is obsolete before it gets printed.  BD

WASHINGTON — Alarmed at soaring premiums and profits in the health insurance industry, the Obama administration demanded on Thursday that insurers justify proposed rate increases of more than 10 percent, starting in September.

Kathleen Sebelius, the secretary of health and human services, issued a final rule establishing procedures for federal and state insurance experts to scrutinize premiums. Insurers, she said, will have to justify rate increases in an environment in which they are doing well financially, with profits exceeding the expectations of many Wall Street analysts.

Consumer advocates generally welcomed the rule. “The days of insurance companies running roughshod over consumers and jacking up rates whenever they want are over,” said Ethan S. Rome, executive director of Health Care for America Now, a coalition that includes labor unions and civil rights groups.