He doesn’t get those algorithms:)  We know that for sure!  Everything we hear is back to the 70s, which is what makes this video from Jon Stewart so contagiously funny!  At the link below there’s another video that tells the whole story, so if you are a doctor and if these letters are still floating around out there, don’t touch and read the comments below from one doctor who commented about receiving one of them and how he feels Newt even scams HIMMS by showing 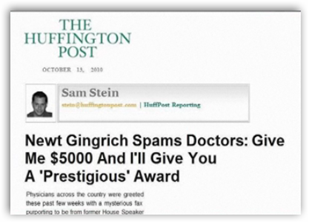 “I got that invite! The scam even promises a free meal. I never got to the point where $5000 was requested, but the letter was enticing, making one feel important with the personal handwriting.
Newt is not only a con-artist, but he's a jerk. In the EMR world he is also scamming HIMSS by his support, getting heavy lobbying money which buys him an occasional key speakership roll in the yearly HIMSS bashes. Unfortunately, that eventually affects doctors by giving the EHR industry a backing from the Republican party too.”

American Solutions for Winning the Future is his fundraising group that creates money for Newt.  It will cost you $5000 if you are a doctor to get an invite and an award from Newt Gingrich.  It is funny in the video that they use the a handwriting computer font.

If you want a little more history on the topic of healthcare algorithms and where he stands and his analytical power, one more link from the Quack archives below.  BD 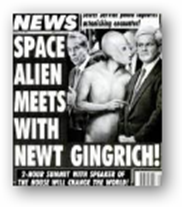 Anyway if you read here often enough you know how I feel about those who don’t use any modern day intelligence and have no concept of Health IT infrastructure – FAIL!  John says using Twitter is not going to make young people like him and he is not “cool” <grin>.  The Twitter deal Jon says is not going to work for him as he is “square’.    After reading the comments on the doctor scam, it doesn’t look like they will like him either.  BD