Frankly I don’t know how a complete and accurate ranking can be accomplished by anyone.  You would also think that as far as just a Yellow Page type of listing of practicing doctors would be possible, but not so.  You can read my post from back

in September of 2010 where I found my former doctor, who had been dead for 8 years still listed as active and accepting patients.  Of course since this hit the news she has been removed and a few other updates on removing some “dead doctors” has been accomplished.

I would also be guessing that investors might be peering in here to see what they are getting for their dollars since the company was purchased by a private equity firm in 2010 as well.  HealthGrades is not alone though as there are other rating service on the web and I found some of the same instances and the same dead doctors which leads me to wonder if one development company works on the information and sells it to the other sites?

There are 2 sides to the rankings, one for doctors and the other side for hospitals.  In speaking with some of my doctor clients here I asked a few of them to look at their ratings and verify for accuracy.  One doctor told me his was flawed in the fact that he was listed with 3 hospitals he has never set foot in and he’s in southern California.

One of the 3 hospitals he was listed with was in northern California and he has never practiced up there, so go figure.  I mention this as when it comes to hospital rankings how do the doctor ratings tie in here?  Are they skewed with doctors listed as being on staff there and they don’t really exist at that hospital?   The answer for Healthgrades was to put out a tool so doctors could go in and fix what they have erroneously reported, give me a break as this tends to shift the responsibility back to the doctors and a company selling services for additional information on doctors should get their information right and not dump this down to the MDs.

When it comes to verifying whether or not a doctor or anyone for that matter is alive, there is the Social Security Death Index and back last year when I found

the numerous errors, obviously this had not been checked in years.  The Social Security Death Index is available on DVD by subscription and goes back to the year 1936 for deaths in the US.  There are also online services where you can check as an individual, one of which is hosted at RootsWeb.

Here’s another website offering the same type of information that made a big splash and press release back in November of 2010.  Several top rated by consumer hospitals have questioned the fact that they were not listed in the ratings to include Harvard Beth Israel Deaconess in Boston not too long ago and I noticed an absence of hospitals like Johns Hopkins in many areas too, so again it leaves many questions unanswered on their algorithms.  How does a doctor admitted convicted of Medicare fraud still carry a 5 star rating one wonders? 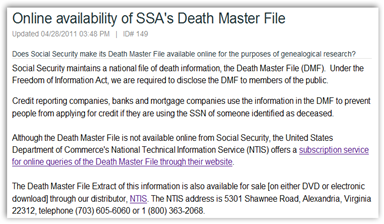 Is this an easy task to keep updated?  I don’t think so but if the services are to be sold and marketed for consumers to make decisions, it should be correct.  We have the same issues boiling over too with digital illiteracy with members of Congress thinking that putting Doctor Medicare claim data on line should be a cinch, well think again about accuracy and that data base needs millions of dollars worth of work before it could be presented in a format that you and I could use, and for what?

If the Senators understood Health IT and just general consumer IT today we would not have time wasting bills generated, see more at the link below.  We have

changed with data being connected all over the web through companies and government entities so the old days of telling IT I want this and cook it up for me quickly are gone, but those who live in the past have not come to grips with this today and as you can read at the link below, one Senator thinks 6 months is enough and it should be up and running with doctor Medicare claims, get a clue!  HHS, has been working on their hospital and doctor listings for about 2 years now and it is still being refined so this guy thinks 6 months for Medicare claims is reasonable, digital illiteracy with lawmakers and some still think all of this grown on trees.  In addition we have Dow Jones suiting HHS over the Medicare claims and I am guessing they may see this as a Health IT opportunity to outsource to generate money and profits to have a company provide this service and they may be biting off a bit more than we are all ready to chew.

Bottom line of all of this is realize that there’s a lot of flawed information floating around out there and when you get past using some of these services beyond a Yellow Page type of listing for doctors and hospitals, be ready for flawed data and don’t get your confidence level too high on what you expect to find.  BD

DENVER – HealthGrades has identified what it calls three major flaws in a recent study published in the Archives of Surgery that says its '50 best hospitals' list "falls short."

The findings of the journal article are fundamentally flawed and could undermine patients' ability to find high-quality hospital care, according to HealthGrades.

The article, "Evaluating Popular Media and Internet-Based Hospital Quality Ratings for Cancer Surgery," compared outcomes for gastrointestinal cancer patients who underwent surgery at hospitals on HealthGrades’ “America’s 50 Best Hospitals” and US News and World Report’s “America’s Best Hospitals” lists. The study asserts that hospitals with the best outcomes for three surgical procedures were often not among those listed as top performers by HealthGrades and US News.