I hope this one has a good ending but as the news reports she was on break from conducting rounds and was not seen again.  Her car was found and the cell phone was stated as sending signals from Oakland but the signals now have stopped.  BD

Police are searching for missing nursing student Michelle Hoang Thi Le, who disappeared while on a break from making clinical rounds at a hospital in Hayward, Calif. 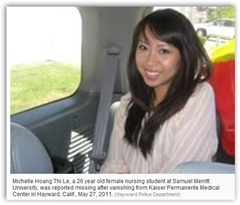 Le, 26, is a student at Samuel Merritt University in Oakland, Calif. She disappeared around 7 p.m. May 27.

Le's car was found a few blocks from the hospital on Saturday, according to a statement by the Hayward Police Department. Le had her car keys and cell phone with her but has not responded to calls.

Anyone with information that may help locate Le should contact Hayward Police Department at 510-293-7000.