I guess there really is a town in Quebec called Asbestos.  The Daily show does their usual routine but until recently the asbestos mine was the largest employer in 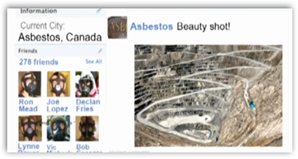 the town.  The government of Quebec is still defending the industry and a recent newspaper article can be read here.

For years, Canada and Quebec have been under pressure from scientists and health groups to stop exporting asbestos because of how its toxic elements are linked to cancer.  Most of Quebec's asbestos is exported to developing countries, notably in Asia.  Anyway watch the video and see for yourself here on how the town of Asbestos keeps producing asbestos in Canada.  BD