I guess this makes sense to buy a company focused n the gastrointestinal market since the other divisions of Nestle make food that we eat.  This way we can be

sure that it’s not their food creating our IBS or colitis:)  They will be having sales people out in force to contact doctors to sell nutrition based products to treat out upset gastro intestinal needs, but will they taste good.  I still remember the cookie dough issues of not too long ago too with the recalls so maybe this is a joint effort to fix some of that stuff.  Back in December of 2009 though the FDA did question Nestle on their “food claims” relative to their “Boost” beverages and I wonder how this will all work together?

Nestle Is the Latest Food Company Questioned By the FDA – What Happened to Prunes?

“In Greek mythology, compassion drove the god Prometheus to bestow the gift of fire to mortals on earth, bringing them warmth and light to relieve their suffering in the darkness. In this same spirit, Prometheus was founded to develop and deliver

the most advanced medical technologies worldwide in order to illuminate treatment paths for clinicians and elevate the quality of care for patients suffering with troublesome, debilitating diseases and disorders.”

Prometheus Laboratories is a pharma company too so again if the Nestle foods make you sick they have you covered for the solution:)  In addition they also are focused on cancer drugs as well.  No longer can we think of Nestle as just chocolate and last to add on here are their diagnostics products so when it comes to food, you can eat it, get diagnosed and treated all by Nestle, maybe.  BD

ZURICH -(Dow Jones)- Nestle S.A. (NESN.VX) will pause in its search for acquisitions for its health science business after completing the estimated $1.1 billion buy of U.S.-based Prometheus Laboratories Inc, the chief executive of the unit said Tuesday. 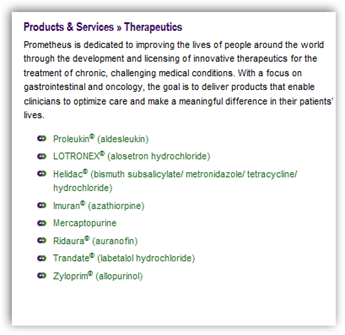 The focus would be on integrating Prometheus, which has anticipated sales of $ 250 million in fiscal 2012, he said.

Nestle Health Science had sales of CHF1.7 billion for 2010, with the figure likely to rise with a contribution from Prometheus and the other acquisitions, Cantarell said.

Sales could reach CHF1.8 billion to CHF 1.9 billion this year. Cantarell said. "We are growing steadily, in the first six months the business is doing fine." 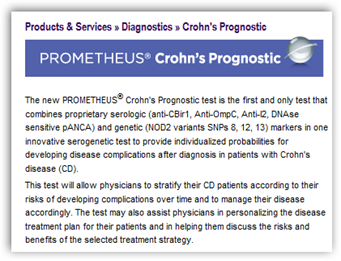 The addition of Prometheus will help Nestle expand into the expanding gastrointestinal market in the U.S. and could also be expanded into other markets, Cantarell said.