Last week I had the opportunity to talk with Heidi Houston -  the Executive Producer of Hot Flash Havoc and what a conversation we had.  Today I just received a

copy to view and review on the Medical Quack.  Last week I posted one of the trailers with an article regarding Wyeth and the Ghostwriters.  Now the Hot Flashes are making their way to Washington DC for a special premier and Hollywood will follow later.  This is an educational film that was created for the sole purpose of brining this awareness to light on what menopause is to further the development and research of women’s health.

Of course, Heidi and myself talked about the subject, as we are both women who have experience in this area, not by choice I might say but there are answers and choices, what the film is all about, education so women can make the right decisions when it comes to doctors, treatments, and health.  There will be an official write up after viewing the film out on the Quack before the September 28th viewing in Washington DC.  I’ll talk about the file and my discussions with Heidi Houston.  BD

Washington, D.C. takes a break from business as usual with the premier

of a controversial new film on menopause; Hot Flash Havoc.

(Los Angeles) September 8, 2010 –Phyllis Greenberger, executive director for the Society for Women¹s Health Research (http://www.swhr.org), has forged a new partnership between health advocates and the world of entertainment.  In honor of National Menopause Awareness Month, Ms. Greenberger is joining forces with the filmmakers of the controversial new documentary; Hot Flash Havoc (www.hotflashhavoc.com).  A premier screening will be held on September 28, 2010, at Burke Theatre in Washington D.C. at 6:30p.m.

Several of the film’s nationally recognized experts including Alan Altman, MD, Pamela Peeke, MD and Susan Wysocki, RNC head of the National Association of Nurse Practitioners will gather immediately after the screening for an informative discussion on the film’s key issues.

Hot Flash Havoc encourages everyone, including the experts, to break the silence of modern culture, speak up and reveal the truth that has remained shrouded in mystery for far too long.   Hot Flash Havoc is the definitive voice on menopause delivering this message of truth  and enlightenment to the nearly 1.6 billion perimenopausal or menopausal women around the world.  Washington D.C. health care providers along with policy makers will be offered the very first look.

The film is circumventing a Hollywood release and instead is going directly into the hands of women¹s health advocates, care givers and policy makers in Washington D.C.  These are the stakeholders who can make the difference and increase educational access on a national level.  The grassroots initiative has already started and the Havoc has only just begun.

The Society for Women’s Health Research is breaking the rules by using this movie as a tool to reach men and women alike with the hope of making a difference on this important issue through research, health policy and media exposure.

Warner Brother’s famed blockbuster, “Sex in the City 2” took menopause out of the closet and onto the screen.  Hot Flash Havoc goes one step further shedding light on a decade of misguided facts, conveying poignant personal stories and providing the truth about women’s options. The film addresses the challenges of making empowering choices in the “Second Act” of a woman’s life in an entertaining and enlightening way.  It’s a hard, fast, funny and compassionate exploration of women in menopause at all ages and stages of life. 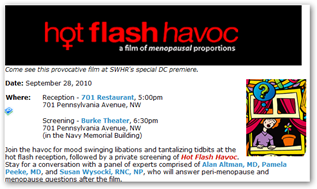 About Society For Women’s Health Research:

The Society for Women’s Health Research (SWHR), a national non-profit organization based in Washington DC, led by Phyllis E. Greenberger is the only organization that dedicates it’s monies and resources for women’s health research specifically through education and research.  It is widely recognized as the thought leader in research on sex differences and is dedicated to improving women’s health through advocacy, education, and research.

Dr. Peeke is a nationally recognized best-selling author and expert in nutrition and fitness. She serves as Chief Medical Correspondent for Discovery Health Television, host of Discovery’s Fit to Live series (based on her latest book), and also the featured physician of the award-winning National Body Challenge series. She is also a New York Times bestselling author of Fight Fat after Forty and Body for Life for Women.