Home » Medically Related » Other Items of Interest » Technology » Robots Showing Up Everywhere, At the Hospital, At Board Meetings and More With Tele Presence Technology

Robots Showing Up Everywhere, At the Hospital, At Board Meetings and More With Tele Presence Technology

Hospitals are investing in robots and if you read this blog often enough, you have seen several posts on this topic and under the related reading below there’s a brief 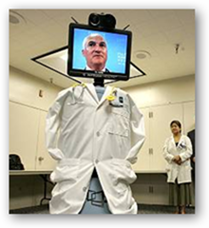 summary.  Their use though is also growing beyond just the hospital as this story in the New York Times shows how the CEO of Mozilla attends meetings via a Tele Presence Robot.  Over the last few years we keep hearing about how expensive it is for a person to physically travel to meetings and conventions.  Is your CEO thinking about this?

Tele Presence Robots for Remote Workers – Invasion of the AnyBots

This hospital received accreditation from the Joint Commission to be a “stroke center” with using the robot and being able to tap into a facility like UCI or a number of other hospitals to have an interventional cardiologist available immediately.  They are using a robot from a company called “InTouch Health” and we have seen their robot at UCLA, Johns Hopkins and many additional places. 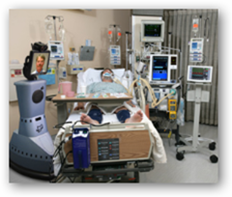 When you think about bad weather, and other disruptions with multi tasking CEOs today, is this the next glimpse you get and how the future communication with officers of companies is going?  There are robots for home monitoring for seniors too and the article below has a robot video that really reminds you of the old Jetsons cartoons with “Rosie”.

Now this is where things get real interesting as the use beyond doctors is growing.  As mentioned above the CEO of Mozilla uses the technology for his meetings.  The robots are smart enough to know when to return to their charging stations too so if you are looking to stay outside the radar, the battery packs are where the power lies. Chances are too that they are also smart enough to send an alert out if anyone is messing around where they should not be.  You do have to open doors for these guys too.

The big selling point here is that tele conferences need to be set up in advance and with the robots the officer just logs on and sets the robot in motion.

This video is interesting as it shows all types of robots that are work in progress.  The robot for termite exploration is interesting. How we as humans adjust and react is something we don’t quite know and understand yet, self included here of course.

The folks over at the XPRIZE foundation did a video to show how people react when the the boss shows up remotely and shows what he sees at the other end via the camera.

In a hospital this could really get interesting as we already have robo doctors floating around so add in some administrative tele presence here with the CEO or board members cruising through and you may never see them in the flesh again <grin>.  Someday it could be just a meeting of the robots while the humans stay at home, but again one human is needed to open the doors for them, but who knows that may be next.  A simple mouse or joy stick is all that is needed to control the robots remotely.  BD

Dr. Shatzel, a neurologist, hustled not to the emergency room where the patient lay — 260 miles away, in Bakersfield — but to a darkened room at a hospital here. He took a seat in front of the latest tools of his trade: computer monitors, a keyboard and a joystick that control his assistant on the scene — a robot on wheels.

He guided the roughly five-foot-tall machine, which has a large monitor as its “head,” into the patient’s room in Bakersfield. Dr. Shatzel’s face appeared on screen, and his voice issued from a speaker.

Military is Using Robotic Doctors too

All Terrain Medical robot in development for the battlefield

Robodoc' coming to a hospital near you

How technology is helping hospitals - UK

Smarter Than You Think - The Boss Is Robotic, and Rolling Up Behind You - NYTimes.com