The commercial leaves a bit to be desired and even with Susan Lucci, it lacks luster

by all means.  Her husband doesn’t even look like her want to be there but is putting his best foot forward.  Education on strokes and the potential to take a drug is the name of the game.

We also have Pfizer and Bristol-Myers Squibb, edoxaban from Daiichi Sankyo, and betrixiban from Merck in addition to the recently approved Pradaxa.  Warfarin is a tough drug to monitor so perhaps we have a new bubble with cardiology drugs on the horizon as this article suggests?  The next item though on the list of course is the cost as even though the FDA approves, that doesn’t always guarantee coverage any more.  BD 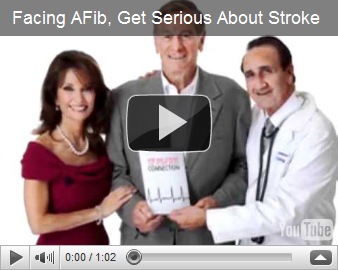 Get ready for plenty of direct-to-consumer advertisements, celebrity awareness campaigns, and big-selling drugs, because Big Pharma appears to have found not just a single hit, but a whole bunch of them.

As my colleague Robert Langreth writes from Chicago, Xarelto, a new blood thinner from Bayer and Johnson & Johnson, just showed solid results in preventing strokes in patients with atrial fibrillation, a heart rhythm disorder. It prevented strokes at least as well as warfarin, the 60-year-old drug derived from rat poison, and, if anything, caused less serious bleeding.

Bayer and J&J overplayed their hand in a press release, claiming a bigger difference versus warfarin than had been proved. But the important point is that its success paves the way for other players. A whole bunch of these new blood thinners are in development, including apixiban from Pfizer and Bristol-Myers Squibb, edoxaban from Daiichi Sankyo, and betrixiban from Merck. It’s possible they all make it. A huge number of patients either are on warfarin or should be but won’t take it because it is such a difficult drug to be on. This is a lucrative, mass-market opportunity for drug companies. It will keep the people who run cardiology clinical trials quite busy.

Next up, expect these companies to market like it’s 1999. Even before a panel of Food and Drug Administration experts met to look at Pradaxa, Boehringer was pitching reporters on a meeting with soap actress Susan Lucci and her husband, who has atrial fibrillation; a video of Lucci and her husband talking about a fib is embedded in this post.