Five years ago when I said tablets were going to be mainstream, everyone thought I was some kind of a goober, well look where we are today.  The Galaxy has a 7 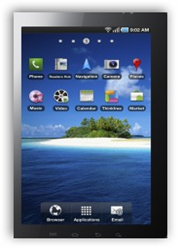 inch screen compared to the 9 inch screen of the Ipad and has a camera, something missing from this version of the Ipad, and it does Flash.  Now with medical records, the 7 inch screen could make a small difference as we all want as much screen real estate as we can find.  AT&T along with Verizon will be offering the unit and contracts are up for discussion at your wireless carriers.  This article states that the Galaxy is in fact a competitor and as always with some units you get something the other unit does not have and vice versa.  Below is a video with a full review of the device.  This is part 2 of the review which pretty much covers what most in healthcare might be looking for to see how it works.

Some papers like the Wall Street Journal are already out with their application and the reviewer said battery life is ok and can still make it thorough the day and has a 2 G of internal memory.  Applications can also be stored on the SD Card.  The processors speed is 1 G.  There will be more tablets coming out soon I would guess too for us to compare.  In addition if you want to view part one on YouTube with Verizon you can link here and he also mentions you can get one at Best Buy.  BD 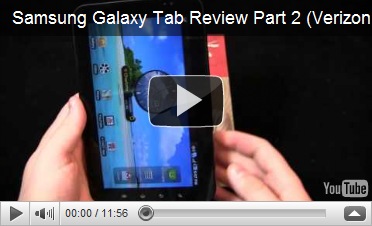 ‘Video Conference, Navigation, eReading, Browser & Augmented Reality’ are some of the upfront features of the new Samsung Galaxy iPad. Galaxy’s 7-inch Android tablet is Samsung’s contender for the iPad. Yes you heard it right, 7-inch screen in contrast to iPad’s 9.7-inch. But Galaxy has something better to offer, something everyone thinks apple missed; a camera, in fact a dual camera. Additionally, the galaxy tab includes a Flash media player and a removable memory card (Thank God!). Despite the small screen size, the Galaxy tab has the same resolution. So yes, it is a serious competitor of the Apple’s iPad.

Sprint: Starts selling the tab for $400 with a two-year contract. Sales start Sunday.

T-mobile: Sales already started at $600 a piece, without contract, with two data plans.

Verizon: $600 a piece, without contract. Sales have already started. Four data plans have been offered.