Well we already had Ozzy Osbourne sequenced to find out what marvels he has and Keith Richards would be another good candidate.  A couple years ago he stated when he passed on he would donate his body to science but that was 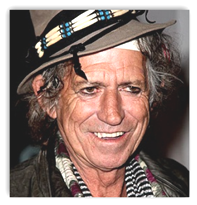 before gene sequencing had really taken off.   Who would have ever thought we would be at the crossroads we are at today with wanting to know how resilient some human bodies can be!

Perhaps we can learn more from his book and maybe he will follow in the footsteps of Ozzy soon so we can find out what genes seem to give him his nine lives.  BD

He’s been a global avatar of wish fulfillment for over four decades and managed to eke more waking hours out of a 24-hour day than perhaps any other creature alive (thanks, Merck cocaine and amphetamines!). As Keith puts it: “For many years I slept, on average, twice a week. This means that I have been conscious for at least three lifetimes.”

You better believe it. This cat put the joie in joie de vivre. As the legendary guitarist for the Rolling Stones, Keith Richards has done more, been more and seen more than you or I will ever dream of, and reading his autobiography, “Life,” should awaken (if you have a pulse and an I.Q. north of 100) a little bit of the rock star in you.

“I’m not here just to make records and money,” he says. “I’m here to say something and to touch other people, sometimes in a cry of desperation: ‘Do you know this feeling?’ ” The irony is, his feeling of fighting the world is exactly what the world loves so much about Keith: he did it his way.