This all happened back in September of 2009 and now as contracts expire and are not renewed with members moving over to United Healthcare, the jobs are going.

The behemoth keeps growing.  The sale all happened pretty quickly while the Tri-Care contract bidding was going on and as soon as it was announced that Healthnet lost the northeast, then the sale took place but as it turns out the contract awards were not that simple either and as I last heard I think Healthnet kept it as they decided Aetna cheated with a conflict of interest.    United paid $500 million for the purchase.

I still get confused at times with the United name on whether it is United Healthcare or United HealthGroup, where the care has disappeared.  Just today though Jeffries was a little concerned over all the acquisitions and the legal exposures of their subsidiary Ingenix though. 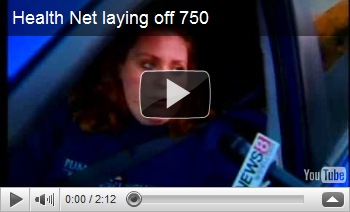 Also in the news I read where United gets an award from Milliman, and that’s

one of those companies, like their own, Ingenix that makes money selling your prescription data, so no wonder they think such achievers.  You can read the statement from Milliman about Intelliscript here.

agreement with United recently so they can enjoy “in network” charges at their facilities.  This is not say whether or not this included “employer insurance” plans as we have St Joseph’s in Orange, California who won’t take that brand through employers but honors other United Plans. You won’t even be able to dodge these folks a geek events either as you can see they are a big sponsor now at CES.

Let’s also not forget their subsidiary acquisition in

China to promote Chinese Medical Devices and Drugs globally and here in the US so we might have an idea what direction this might be going as they are known for driving down cost any which way they can, so perhaps drug companies in the US as well as us will feel the pinch, but maybe not too bad as many of them have companies or interest in China already, but doesn’t do much for our jobs I here I don’t’ think.

“We are familiar with the Chinese regulatory system and are well connected with most of the top urban class A  hospitals and clinical trial centers that are GCP certified by the China State Food and Drug Administration (SFDA). Moreover, since we worked many years in multi-national pharmaceutical companies ,we are well versed in ICH, European and United States Food and Drug Administration (FDA) requirements on Good Clinical Practice (GCP).

One more item of note, they also have a bank with over 1 billion on deposit through

health savings accounts so the investment bankers even on Wall Street don’t get a lot of this action directly but it could be rolled on the market though.

How did they do all of this, with those algorithms that Ingenix produces and has produced for years, all mathematics on how they made their money and we all

remember too where the former CEO ended up with the SEC investigation; however he’s back out there now with a position at a private equity firm, keep your eyes open as these folks want to own everything it looks like and even through subsidiaries they get money from other health insurance carriers like the out of network settlement from the AMA where doctors where short paid on out of network charges – compliments of those algorithms.

Perhaps now someone might comprehend why I think Congress better hire some Algo Men quickly as the Algo Men at United seem to outsmarting everyone along the line and making huge profits and taking them to the bank and it gets bigger every quarter.  Wendell Potter keeps telling use as he worked in the business for years and knows the Algo Game.

These are good links in this post if you want to read up on more history so until we get to be somewhat equal with technology, you and I go to battle with swords and daggers and United has the equivalent of machine gun technology and all the acquisitions and profits to prove it.  BD

Health Net of the Northeast will lay off 750 workers between January 2011 and March 2012 as it closes its Shelton office, a state filing shows.

Health Net announced last year that it planned to stop offering health insurance in the Northeast, and it sold its membership rolls and licenses to UnitedHealthcare.

But the affect on employment in Connecticut wasn't entirely clear until the health insurer filed figures under federal law with the state Department of Labor.

"We have actually hired some Health Net employees already since the transaction was first approved," said UnitedHealthcare spokesman Daryl Richard, noting that the company employs about 4,000 in Connecticut.