This is horrible and here it is.  As the video says this is all about numbers and 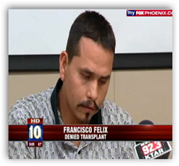 you can see the hospital stating they can’t afford it and have 22 more on the waiting list and they are making actuary decisions.  The hospital stated that even with hepatitis he could have lived for a number of years.  THE LIVER WENT TO A PATIENT WHO HAD INSURANCE COVERAGE.  The newscasters here are even upset over this with their coverage.

The patient had checked into the hospital and he is 32 years old and the cost was $200,000 for the operation.   Coverage for bone-marrow transplants have also been eliminated.  He is checking on Texas now to see if he can get his transplant

there.  Somebody else received the liver.  The family has knocked on doors. The hospital representative said they can’t afford the cost of the surgery.  The patient is healthy enough to where he still had some time and is not quite on death’s bed.  There are 100 patients state wide that are no longer covered and politics is life and death here.  When will politicians wake up.  Again, this is so sad and such an ugly situation.  The patient’s niece chats with the newscaster after the initial story.  BD

PHOENIX - Things did not go as planned for a valley man who checked into the hospital to get a liver transplant Monday -- and it's all because of the state's AHCCCS cuts.

32-year-old Francisco Felix lost a chance at a liver transplant due to cuts in AHCCCS, Arizona's Medicaid agency. And Banner Good Samaritan Medical Center says it has more than 20 patients in a similar position.

Back on Oct. 1, 2010, some transplant surgeries stopped being covered by AHCCCS. Felix has Hepatitis C and cancer, conditions that disallow him from care.

A family who suffered a death donated the liver directly to their friend Felix -- but his family could not come up with $200,000 in time to help pay for the transplant.