incorporated into the Nuance group of companies.

Nuance seems to be all over the news today in healthcare and beyond.  Speech recognition has already been present in radiology and now one more new platform comes into being.  Back in March of 2009, RadWhere was announced and the new PowerScribe 360 works with it and the other current radiology speech recognition technologies.

If Nuance hasn’t created it, it almost seems like they bought it. 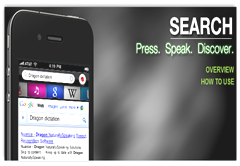 You can also download and use Dragon on your Iphone.

A short while back Nuance acquired ShapeWriter and nobody seemed to know what they were doing here.  It turns out today that Nuance T9 is a virtual keypad

that is coming along with the Samsung Wave II in Europe and Asia so they have now moved from being strictly speech input to touch for phones.  Below is the original post from a

Back in February Nuance bought MacSpeech, and no wonder the rumors were flying about Apple buying Nuance last week.

Of course they still have Dragon Naturally Speaking and Paper Port which one can still buy out of the box too.  BD

BURLINGTON, Mass., Nov 29, 2010 (BUSINESS WIRE) -- Nuance Communications, Inc. (NUAN 17.89, -0.11, -0.61%) today announced PowerScribe 360, an advanced radiology reporting and communications platform that combines the best capabilities of PowerScribe and RadWhere into a unified solution. PowerScribe 360 was designed based on feedback and the extensive experience from Nuance's growing list of radiology customers, which today accounts for more than one third of all radiologists in the United States. This new platform offers unmatched speech recognition accuracy and introduces extensive productivity, communication and administration features that will redefine the industry standard for optimizing the multifaceted radiology workflow.

With PowerScribe360, customers can seamlessly combine the most accurate speech recognition engine in the market, Dragon Medical, for core radiology reporting with options for critical test result management (CTRM), external data capture, multi-site workflow support and structured reporting into a single solution. With workflow and communication tools never before offered as part of a traditional radiology speech recognition system, PowerScribe 360 gives radiology departments and imaging groups the power to create high-quality documentation and turnaround diagnostic imaging interpretations faster and more efficiently than ever before.