This is a neat story and technology.  According to the video the mixture looks like 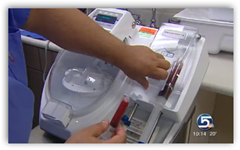 Jello and is sprayed on.  The woman patient is a diabetic with a foot wound that will not heal and with using her own stem cells, it’s fix and and win.

The patient’s first skin graft failed and the patient also had stem cells during her heart surgery 6 weeks ago too so between the heart and her foot wound it looks like she’s on her way.  They are hoping for large scale clinical trials soon and the potential of use in the military of course is right up there too.  In the video, the patient asks if they are going to inject the “Jello” and they said no, we are going to “spray” it on.  BD

SALT LAKE CITY -- A spray solution of a patient's own stem cells is healing their severe burns. So far, early experiments under a University of Utah pilot project are showing some remarkable results.

What was once a serious burn on Kaye Adkins foot is healing nicely now because of a topical spray. With diabetes as a complication, the small but open wound had not healed after weeks of failed treatments.

Dr. Amalia Cochran with the university's Burn Care Center says, "With a wound that is open for several months, as this patient suffered prior to seeing us in our burn clinic, we worry about a pretty heavy bacterial load there."

But enter the evolutionary world of regenerative medicine, using almost a bedside stem cell technique that takes only about 15 minutes. With red cells removed, a concentrate of platelets and progenitor cells is combined with calcium and thrombin. The final mixture looks almost like Jello.

The military is keeping a close eye on the Utah project. The future for treating burns on soldiers could stagger the imagination even more. Patel says "regrowing your own skin in a bioreactor is very realistic and that's not five years away even. We start with a biological band aid and hope to end up with basically synthetic skin that's still derived from your own cells."