This is done very well in Jon Stewart style and worth a listen.  We all know what

happened and what continues to happen and they don’t come out and say it, but it’s “those algorithms” once more that make big bucks!   This is pretty funny on some of the points they hit on.  The authors are a combination of one journalist from the New York Times and one from Vanity Fair.  The reason that we failed is because we were bad gamblers and the only one that could gamble well was Goldman Sachs.  Merrill Lynch said they fell for their own scam.  The idiotic clients, us, as Jon says were the victims.

The problem occurred because of an “idiot” shortage and they ran out them.  As is translates out in this review, gambling is innovation, and shoot no wonder innovation is having problems in healthcare today…hmmm…something to this?  The problem is “gambling addiction” and Jon asks when can we have an intervention?  Now these folks are addicted to data, data and more data and we get that in healthcare with being humans shoved into data tables and mined and analyzed up the ying yang for profit so we have a double addiction here.

They gamble on human health too and you can read a post from the Quack here about Human Hedge Funds with bonds and probably some derivatives to where if the folks with chronic diseases live too long, the investors love their money. 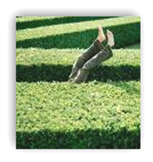 “The solution? A bond made up of life settlements would ideally have policies from people with a range of diseases — leukemia, lung cancer, heart disease, breast cancer, diabetes, Alzheimer’s. That is because if too many people with leukemia are in the securitization portfolio, and a cure is developed, the value of the bond would plummet.”

This might be another good book to add to my current list that I need to read as it rolls right over into the algorithmic processes for healthcare for profit!  BD

A post-crisis tally. An artful set of slideshows provides a tour of which wheelers and dealers on Wall Street managed to survive the crisis; which ones thrived, and which ones decided to get out. (links form the LA Times)