Healthcare Reform Survey Finds That 74% of Physicians Will Retire, Work Part-time, Or Seek Other Alternatives

Only a little over a quarter of the doctors surveyed (2400) said they would run business as usual.  Cash only practices could be established and of course the very good reasons for that move would be to get rid of the awful insurance and 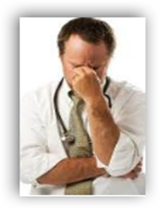 Medicare billing, they hate it and for good reason.  The only way to stop this from happening would be to reform health insurance, not healthcare, specifically the insurance and billing end of itself.

The insurance companies have all the data and run the systems via contract for Medicare anyway, so perhaps a “Roosevelt” move will be in order one day to actually get to a true single source pay?  If not, you really don’t get it.  I don’t know how with all the recent acquisitions they are not somehow forced to separate some of the interests they have today.  Dr. Berwick, head of CMS said the payer area was one of the first he wanted to dig in to.

Many I have spoken to are looking to become employed either directly by the hospital or work for a group contracted to the hospital and then, let’s not forget the constant flow of software and the learning curve needed to absorb each new addition to where they need to be cost effective.  Patients are not liking much of what is being dished out either, no problems with the doctors, but again the algorithms and not knowing what will and will not be paid for.  It sucks!   Businesses that are run like this are the problem.

UnitedHealth To Pay Out Higher and More Frequent Dividends to Share Holders, No Caps on Earnings for Executives or What Is Spent on Lobbying Says the Board

The study further says some will only work part time, well you need the rest of that time to keep up with all the administrative nightmares so how can one work full time and keep up with that mess.  When full time a clerk in the office handles and by going part time, they don’t have as big of a mess and can do some of it themselves.

Healthcare reform is not at fault for this as it was occurring anyway, but reform

with insurers and all their algorithmic formulas for profit may have kicked it into  high gear so it’s moving a bit faster than before.  The Private Practice today is in fact an endangered species all the way around.  Sadly while we are preoccupied with IPhones and other electronic devices, these folks are slowly fading away.  This makes for a good time to make mention too of the Vanishing Oath, which many doctors state that every student thinking about being a doctor should see.  BD

Healthcare reform will usher in a new era of medicine in which physicians will largely cease to operate as full-time, independent, private practitioners accepting third party payments. Instead, they will work as employees, as part-timers, as administrators, in cash-only “concierge” practices, or they will walk away from medicine altogether.

These are some of the findings of a new report commissioned by The Physicians Foundation entitled "Health Reform and the Decline of Physician Private Practice". The report outlines provisions in the Patient Protection and Affordable Care Act and examines economic, demographic and other forces impacting the way doctors structure their practices and deliver care.

"The private practice physician is rapidly disappearing," Goodman notes. "Both market forces and the health care reform law are forcing physicians to find new ways of running a practice. We are extremely concerned about how this will affect patient care."

Drawing on the perspective of a panel of healthcare experts and executives, the report projects physicians will follow one of four courses:

As Healthcare Reform Takes Hold, 74% of Physicians Will Retire, Work Part-time, Or Seek Other Alternatives - - ModernMedicine