As I am reading the content here, this breakdown and potential strike issue is about “working conditions” and not benefits and money.  Hospital Corporation of America is the one of the largest “for profit” hospital chains in the US.  This has 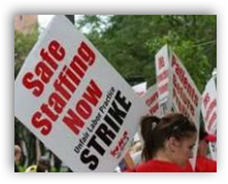 been an interesting year in the for profit business as companies and hospitals have learned to run mean and lean and maybe not necessarily in that order. There have been several articles on the web about this fact and not only in healthcare and analysts are wondering what’s next when the “bare bone” level has been reached, what is the next area of attack for efficiencies to continue the profit making mode.  In June, HCA purchased Miami-Dade hospital which now is in the ranks of the for profit facilities.

This is just one example as everyone is speculating how the “for profit” sector will impact healthcare and how lean can they go?  The next area of course too is software and the efficiencies to be gained there and we seem to have a clash here too with clinicians and administrative sectors having to learn all the applications and procedures quickly to put dollars on the bottom line

immediately.  Investors get frustrated when this doesn’t happen overnight and my suggestion at this point would be to have the investors “walk a mile” in the shoes of a clinician to see how all this comes about, the time and training it takes instead of just hollering for dividends as if you don’t understand it and keep pushing, you get this, a strike over working conditions.  We are not doing a very good job I think today in listening to the people who are doing the job so I think anyone who wants to invest a substantial dollar amount in “for profit” hospitals and other ventures would do themselves a favor in visiting as a patient to see what the processes really are.  It’s 2 different worlds with proof of concept and actual performing employees, ask me about that having written a medical records system and then training clinicians how to use it, eat your own dog food as it is called.

As you can further read, offers have been made to give small increases and no changes to the fully paid health insurance plans, it’s about working conditions and patient care here.  This is not the first strike to bring this to the lime light either as there have been others trying to get the attention of the algorithm hungry administrative management to look at how they play out in the hospital.  They are not looking at this side for the most part, only money. The only time this comes to surface it seems is when a big CEO or manager ends up being a patient themselves and they get exposed to current working conditions so if the strike doesn’t do it, I guess we can hope for more administrators to become patients as I always say there’s nothing like first hand experience with data or being a patient, it’s about participation, whether you want to be there or not.

In addition to Riverside, there are 4 other hospitals owned by HCA getting ready for the same type of strike or activity in California.  BD

RIVERSIDE (CBS) — Caregivers, custodians, radiologists and other personnel at Riverside Community Hospital plan to stage a 24-hour walkout later this week in response to a stalemate in negotiations over a new contract, union officials announced Monday.

Hundreds of workers represented by the Service Employees International Union-United Healthcare Workers West are expected to protest outside RCH between 6 a.m. Friday and 6 a.m. Saturday.

Workers are at odds with the Hospital Corporation of America, which owns RCH, over what their union alleges are unfair labor practices.