Researchers with UCLA’s Jonsson Comprehensive Cancer Center have found that melanoma patients whose cancers are caused by mutation of the BRAF gene become resistant to a promising targeted treatment through another genetic mutation or the overexpression of a cell surface protein, both driving survival of the cancer and accounting for relapse. 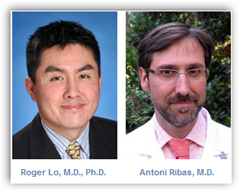 The study, published Nov. 24, 2010, in the early online edition of the peer-reviewed journal Nature, could result in the development of new targeted therapies to fight resistance once the patient stops responding and the cancer begins to grow again, said Dr. Roger Lo, senior author of the study.

In a clinical trial at UCLA’s Jonsson Cancer Center and other locations, patients with BRAF-mutated metastatic melanoma have been responding very well to an experimental drug, PLX4032. However, the responses are short lived, averaging seven to nine months in duration, because the cancer gets around the blockade put up by PLX4032, which targets the BRAF mutation found in 50 to 60 percent of melanoma patients.

Lo and his team spent two years studying tissue taken from patients enrolled in the Jonsson Cancer Center study to try to determine the mechanism of resistance. They also developed drug resistant cell lines to study, in collaboration with another team at UCLA’s Jonsson Cancer Center led by Dr. Antoni Ribas, an associate professor of hematology/oncology

It had been theorized that BRAF was finding a way around the experimental drug by developing a secondary mutation. However, Lo determined that was not the case, an important finding because it means that second generation drugs targeting BRAF would not work and therefore should not be developed, saving precious time.

Lo said that while his team was studying resistance, they expected to find secondary mutations in BRAF.

“We were surprised that we couldn’t find a single case where a secondary mutation in BRAF was driving drug resistance,” said Lo, an assistant professor of dermatology. “In a big portion of cases where cancers acquire resistance to targeted drugs, the oncogene being targeted finds a way to get around the drug by developing other additional mutations.”

Cancers, Lo said, are very adept at finding ways around the drugs being used to fight them.

“You hit it with an axe, but the cancer soon finds a way to mitigate the effects of the axe,” he said.

Lo and his team found that these mutually exclusive mechanisms of acquired drug resistance account for about 40 percent of the patients who were treated with PLX4032 and later acquired resistance to it. In some cases, Lo found that the cancer cells began overexpressing a cell surface protein that created an alternate survival pathway for the cancer while the BRAF survival pathway was being blocked by PLX4032. In other cases, a second oncogene, NRAS, became mutated, allowing the cancer to short circuit the PLX4032-inhibited BRAF mutation and reactivate the BRAF survival pathway. PLX4032 does not target the NRAS mutation, so the cancer can begin to regrow.

Lo said he expects to find other mechanisms of resistance in the remaining 60 percent of relapsing patients where neither of the two new mechanisms were found.

“It’s important to find all the mechanisms of acquired drug resistance in this type of melanoma and figure out how to target them using drugs designed to hit those specific mechanisms,” he said. “We’ve found two mechanisms in two subsets of melanoma and we’ll need different drugs to treat those two subsets.”

Going forward, Lo and his team will study the resistance mechanisms of the two subsets discovered and any others uncovered later to perhaps find better targets for therapy. For example, targeting the cell surface protein overexpression may prove more difficult than finding what causes the overexpression further upstream and homing in on that.

“How does the cell surface receptor get turned on in the first place?” Lo said. “We need to trace it back to its origin, find out what machinery is turning it on and shut that down.”

Lo’s study is an example of the translational research focus at the Jonsson Cancer Center. The tissues from the patients in the clinic were studied in the lab, where Lo and his team found what was causing resistance in some cases. That information will be used to find drugs to target those mechanisms that will then be brought back into the clinic to be tested in clinical trials.

“Working with the patients and then working in the lab gives me a different perspective,” Lo said. “When patients ask what will happen to them if the experimental drug stops working, we can tell them that we’re working 24/7 in our laboratory to figure out why that happens and discover a way to stop it.”

About 68,000 cases of melanoma will be diagnosed in Americans this year alone. Of those, more than 8,700 people will die. For patients with metastatic melanoma, like those in the Jonsson Cancer Center study, there are few effective treatments, so it’s vital to come up with alternative therapies, Lo said.