I am guessing the case for the layoffs and replacements were not substantiated and the employees stated it would put patients at risk.  This is the first I have read something of this sort but the article did not state what percentage of the entire force the 150 employees represents.  BD 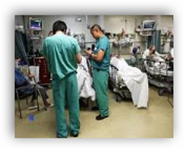 New York City's public hospitals have been barred from laying off about 150 electricians, carpenters and laborers -- at least for now.

A Manhattan judge ruled Wednesday that the city Health and Hospitals Corp. "failed to employ a sound methodology" in deciding to let go about half its laborers and one-third of its electricians and carpenters. The ruling sends the matter back to the hospital agency for further evaluation.

The carpenters' lawyer, Robert Stulberg, calls the decision a victory for the tradespeople and patients. The workers said the layoffs could jeopardize patients because the employees' work involves fire and other safety measures.