Amazing Charts has been around for a number of years and the Owner/President wrote the original version with his goal of keeping it simple and affordable.  A few

years ago I briefly met Jonathon at one of the medical conventions I attended and occasionally when I have time, slip over into their user groups and say hello.

The software is called AC OnCall and you can use with either the iPhone or the Ipad.  One item that has remained the same for years is that you can download a trial version of the entire program for your PC and use it for 3 months prior to purchasing.  I had not looked at their website in a while and I can see now they have added quite a few practice management connections for the EHR system to include EZ Claim for one who is an advertiser on the Medical Quack and back in my days of writing code I also integrated with EZ Claim for billing to avoid duplicate data entry.  Back in 2003-2005 hardly anybody was doing that and now everybody is.  It was also less complicated back then too. 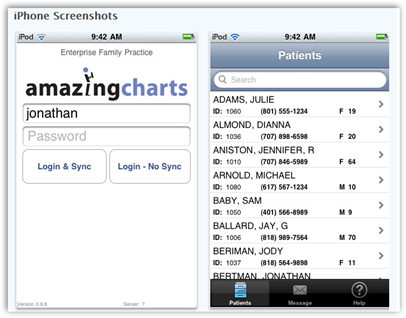 To use the program you need to be an Amazing Charts client and have purchased the licenses to use, and again over the years everything has remained very affordable too.  One service Amazing Charts has offered as long as I can remember is the back up service, and think about that one in times of disaster as it’s sure handy and will keep you up and running, and again this has been around since day one back in 2003 I think, but don’t quote me for the exact year.  Amazing Charts has been on of the longest established players in the medical records area and Version 6,  is 2011/2012 compliant and was certified as a Complete EHR by the Certification Commission for Health Information Technology (CCHIT®), an ONC-ATCB, so stimulus money is available with showing meaningful use.  BD 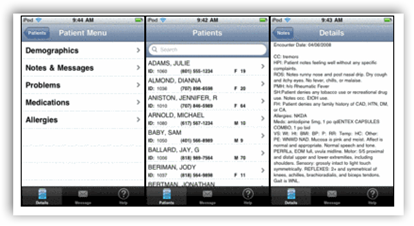 AmazingCharts Inc., today announced a new software App that gives medical practitioners mobile access to their Amazing Charts EHR records from an iPhone, iTouch, and iPad. The new App, AC OnCall, is available at the iPhone App Store for a one-time charge of $24.99.