This company is out of Texas and they use a physician from Reno to look over the patient’s records that are available and he makes the predictions on how long the person will live.  These are investor groups that are buying up life insurance policies that no longer are available for the individual but the policy keep going and pays off

the investors when the individual passes on, a sick way of making money if you ask me.  As one other article written by the Wall Street Journal was titled “Investors Bets on Stranger’s Lives”.

The doctor they use in Reno to project the life spans said he doesn’t review his predictions and sometimes does dozens of them in a day’s time.  Life Partners stands by the doctor’s decisions and methods.  The more I read about this the less I like it and aside from betting on when individuals are going to die, which is sucks ethically in my book, the methodologies here sound weird too.  When you read about one investor being nervous  as he needed to pay extra on a couple policies as their physician supposedly gave him some conservative numbers, say what!

So investors are having to pay longer than what they thought they would as the former policy holders are living out longer so in this case I don’t have any pity on the investors and they can keep paying those premiums.  One thing I hope is that privacy is guaranteed here or this could be a real mess if identities were to be made known via any type of a breach.  You could have Sam showing up to shoot Sue if he wanted his money sooner and got tired of paying the premiums.  If I am reading this correctly the investors are getting some health indicators here?

Here’s a few more clips from the article on the former policy holders:

So when you read the information above, risk is assessed by the “disease” or chronic condition of the former policy holder.  The web site activity solicits individuals to cash out on their policies.  It will be interesting to see how the SEC gets involved with investigating this one.  BD 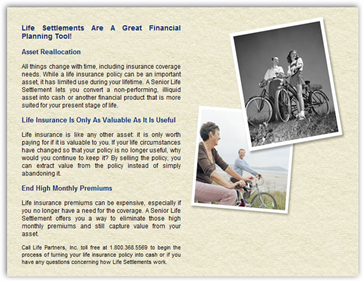 Life Partners Holdings Inc. of Waco, Texas, arranges for investors to pay premiums, then collect when the insured person dies. It says it has sold about $2.8 billion worth of policies to 27,000 clients.

In an announcement emailed to its outside sales agents that was reviewed by The Wall Street Journal, Life Partners said the new approach would target annual returns for its clients of 7% over seven years, instead of the targeted 12% to 14% annual returns over shorter periods, typically four to six years, it had promoted as recently as last year.

The article reported that many of the insured people are living well beyond the estimates provided by Life Partners, requiring the investors to pony up more money for annual premiums and cutting their eventual returns.

Life Partners said in the email to agents it would alter the way in which premiums are paid to insurance companies. It will begin to pay insurers the least possible amount each year to keep policies in force, rather than the annual amount recommended by insurers. The switch means that the upfront payments that investors make to purchase policies and cover premiums would be stretched further than under current practice, to seven years, the company said. In general, life insurers don't like being paid the minimum in premiums because it makes it tougher for them to turn a profit.

Since its founding 19 years ago, Life Partners has sold its clients rights to the proceeds of 6,400 life-insurance policies with a total face value of $2.8 billion.