Home » Insurance » Medically Related » My Commentaries » UnitedHealth Group Reports Record Profits for 2010 of $1.80 Billion-Algorithm Revenues Up with Subsidiary Groups Too

UnitedHealth Group Reports Record Profits for 2010 of $1.80 Billion-Algorithm Revenues Up with Subsidiary Groups Too

at the link at the bottom of the post.  Profits were up from last year which came in at $1.58 Billion and basically people were not going to the doctor was one of the reasons cited for additional income this year.  We all know how healthcare reform has been nothing so far profits for carriers no matter how loud they complain.    Premium dollars grew with additional policies and less could afford to do to the doctor.

“Algo Profits Were Up”

The “algorithm” side of their business, Ingenix and subsidiaries increased 10% and if you watched the news this year there were more then plenty

acquisitions made at the tech level of the company, subsidiary watch.  When you look at the sector of business below on the chart, prescription and health revenue units were down but the algorithm revenue was up!  There’s money in those Algos.

Ingenix (algorithm) revenue increased to $2.3 billion, 28% over the year.  These services are sold as technology and some use their services for anti fraud auditing, but least we forget the 15 year Ingenix case of over charging and the refunds issued to doctors and patients, so again it’s always good to know where the mathematical formulas point these days.  Ingenix got out of the property casualty medical business this year with the sale of one of their subsidiaries. 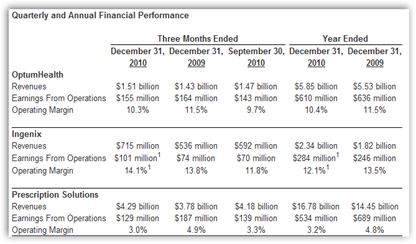 Here’s an example of a United/Ingenix contract via acquisition earlier this year with the VA now doing business with a United subsidiary.

It may be too soon also to see how the China investment is moving along as it also falls under the algorithm part of the business.  You have to go 3 layers down the daisy chain of subsidiaries to find this one.  It does get confusing today with all the mergers and acquisitions to really put your thumb on who is doing what, when and how at times as when data gets merged for accelerated data intelligence, waters get cloudy.  I3, a company owned by Minnetonka-based

“We are familiar with the Chinese regulatory system and are well connected with most of the top urban class A  hospitals and clinical trial centers that are GCP certified by the China State Food and Drug Administration (SFDA). Moreover, since we worked many years in multi-national pharmaceutical companies ,we are well versed in ICH, European and United States Food and Drug Administration (FDA) requirements on Good Clinical Practice (GCP). “

With combing data and reaching out for business there were also expenditures for programs created like putting pharmacists on pay for performance at Walgreens to sign individuals up for various programs and some of the data for this mining exercise was to be created via the Ingenix data end of United to programmatically predict who was going to be a patient with selected chronic conditions.

You can read more about Ingenix MedPoint here.There’s also a flash presentation where you can view the process here.  Here’s a little more detail on how the costing algorithms work by doing a risk assessment based on getting information on your medications from drugs stores and pharmacy benefit managers.

The company also made a splash at CES this year in joining in as a platinum sponsor which shows a somewhat varied business plan for marketing than what we have seen in the past.

Going to CES This Year? Healthcare Represented With Mobile Devices and Insurance Companies-United Healthcare A Sponsor This Year

accounts under its Optum Health group and if you read the news this year loans were made to many healthcare agencies through the Optum Financial Services. division.

Long and short of it is that mergers and acquisition of technology divisions make it possible to run the rest of their business through the creation and modification of business models using algorithms and code to predict and project business intelligence and profit directions.  In addition, with all the mergers and acquisitions occurring, we don’t know what next levels of data will be collected and analyzed yet for the next areas of profit making to be explored.  That takes time and some of the acquisitions are still fairly new so it may take the algorithm folks at Ingenix a while to figure out a plan as to how to approach and maximize the data to achieve even higher levels of profits next time around.

In the meantime, as citizens we are basically left with having to take a knife to a gun battle when it comes to getting our care and battling claims as years of data has been collected, and all of it is not always correct, but it is held against the consumer in so many ways with a data rap sheet that is dumped on the consumer to prove incorrect if needed.

report in a minute and consumers spend months and years to correct data that we had nothing to do with the input and profits for such algorithms continue to make for huge profits on Wall Street.  Sadly to say the very same methodologies are graduating in format to healthcare too.

Full Year Revenues of $94.2 Billion Increased 8% Year-Over-Year, and Include a 10% Increase in Fourth Quarter Revenues to $24 Billion

Stephen J. Hemsley, president and chief executive officer of UnitedHealth Group, said, “Our strong advances in serving customers across key performance measures over the past two years have come from a consistent focus on fundamental execution. That focus is driving growth and favorable business results. We are positive about the future and our potential to address evolving market needs. We believe our two primary platforms – Health Benefits and Health Services – will be effective vehicles for deploying our assets and resources to help address the broad needs of customers and key participants in the health system and health care marketplace.”

Management anticipates UnitedHealth Group’s 2011 revenues will approximate $100 billion, based on strong customer retention and new growth across its businesses, as well as contributions from recent acquisitions. The Company affirmed its outlook for 2011 net earnings in the range of $3.50 to $3.70 per share.

UnitedHealthcare Community & State, Ingenix and Prescription Solutions – increased revenues by more than 10 percent year-over-year in both the full year and the fourth quarter