Well perhaps not so much in the last couple of years, but prior to this time you could

find all kinds of security leaks in hospital networks and I mean flat out stupid stuff like employees having Lime Wire installed on their desktops!  I have removed such instances myself and the network administrator put the employees under the active directory to where they could receive and send email, but duh, forgot to put the new computer added to the network under group policy, which is the software that governs who can go where and access what on a network.  It was a big issue and then I found a few other programs where nobody had placed any anti virus software on some of the computers too.

This legal case stated that the nurse did open the file but was not able to look as he was busy and that physicians saw he was logged in and opened up the chart to look, either that or they knew his log on, but story # 1 sounds more believable in my book.  Now if that were the case they would have had to run in there within 5 to 10 minutes as the computer “should” time out and thus require a log on to once again access the computer and files. So who we believe here?  The nurse is asking for $400,000 and wants his 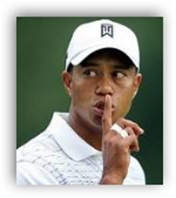 reputation back.  Maybe Tiger could kick in here on the money to help him out?  At any rate the case is now evolving around security on the hospital network and however this turns out for the nurse, you can bet security on the network was certainly reviewed and perhaps some modifications  were made.  The good old audit trails will tell if it timed out and for how long, etc. that is if security was properly in place for that to happen and I would think he needs to have some kind of idea as to who the physicians were that accessed the records.

It could be kind of a convincing defense if in fact this is what happened.  BD

According to the docs, Tiger's fame is "central to Mr. Rothenberg's claims that [the hospital] is engaged in a continuing cover-up" -- because if Tiger weren't a big name ... the hospital wouldn't have made such a stink about the records being leaked in the first place.
David claims the hospital is using him as a scapegoat to cover up the true reason for the leak -- the "lack of basic computer security for [the hospital's] patient health care system and the behavior of numerous doctors ... who inappropriately accessed [Tiger's] health care information."