One Note is probably one of my favorites and I have it on my Windows Mobile phone and it comes in handy for notes and to synchronize them so a little bit of the Office Suite love comes to the Iphone.  Will the IPad be next?  To me it certainly sounds like 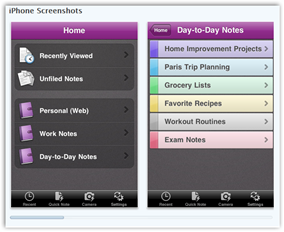 the potential next transition.  I am a bit partial to Office as it is what I know ad what I have used for years.

Actually Pfizer is a big fan of One Note and at Microsoft itself I believe One Note has taken over the spot where Power Point used to be the most commonly used Office product.

When I went to HIMMS in 2008 you can read about how I organized myself with One Note with my “intelligence” files ready to write notes and they had some basic notes and sections already made up on who I wanted to see.  2 years ago people looked at me like I was some kind of a “goober” and even the EHR vendors at HIMMS were afraid to walk outside the booth and use a tablet for something beyond a medical records system, but it works well for me and still does.  Just use the second search box here at the Quack and type in One Note and I have a ton of posts about it.

HIMMS 2008 Summary - Getting organized is the trick

My notes are all in synch too so they updated on my network.  The image below shows a EHR vendor with the skeleton page I had ready to add notes to.

During my interview with Mike Naimoli with Microsoft Life Sciences we chatted a bit about using tablets and how they work well with collaborating, and if you have a tablet pc you need OneNote to go along with it by all means.  Life Sciences likes One Note too. 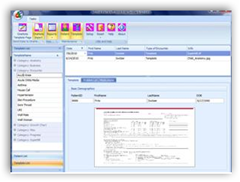 While here I should also mention the One Note EMR, which is not a certified EHR system but is very basic and for a psychiatrist as an example, it can work well with a lot of free text notes.  I happen to know the developer here and he does good work.

One Note EMR 2010 From Ablet Factory

I can certainly understand why One Note was first on the ladder too for Microsoft Office products for the IPhone and hopefully soon maybe the Ipad.  Outside of Apple themselves, who is #1, Microsoft is in the #2 spot for creating the most software for Apple computers.  BD

Microsoft released a version of its OneNote note-taking application for the Apple iPhone on January 18.

Starting today, in response to user requests, Microsoft is making OneNote Mobile for the iPhone available as a free download from the iTunes store, said Jason Bunge, Senior Director of Office Product Management. (I’m sure more than a few of the requests came from Microsoft employees with iPhones… but I digress.) The product will be free for a limited time period, the end date of which Microsoft is not specifying today.

OneNote Mobile for iPhone lets users take notes, capture and embed photos from their iPhone cameras and sync these automatically to their SkyDrive accounts, allowing them to access/share the notes across their Windows PCs, Windows Phone 7 devices and iPhones. Supported browsers for OneNote on iPhone include Safari, Internet Explorer, Firefox and Chrome. There is no “out-of-the-box” Live Mesh or DropBox support for OneNote for the iPhone.

Microsoft makes OneNote free on the iPhone. Is iPad next? | ZDNet