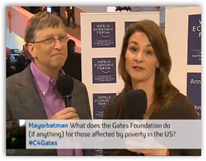 matching an contributing.  The UK is one of the countries working with the foundation.  There were a few questions asked here and tomorrow there will be a session with Bill Gates answering questions that have been sent in. Notice the “tweets” right across the screen here?

Meanwhile while on the subject of Microsoft, Kinect was there and Mashable has a whole display of pictures.  You can hear both Bill and Melinda Gates talk about their game plans and their success with engaging governments worldwide.  BD

Although Bill Gates remains Microsoft chairman, his priorities may nowadays lie elsewhere. In 1994 he married Melinda (they have three children), and in the same year the couple established the Bill & Melinda Gates Foundation.

The foundation is co-chaired by William H Gates Senior, Bill Gates's lawyer father, and former Microsoft Business Division president Jeff Raikes, originally recruited to the company by Steve Ballmer in 1981. It says its main focus is to tackle hunger and poverty among the world’s poorest people, to use science to save lives in developing countries, and to improve education, housing and access to information in the United States.

Bill Gates: capitalist to philanthropist • Stories • Who Knows Who