By next month all the emergency room physicians will have a scribe at their service with entering information into a lap top or a tablet computer.  The article below states that across the country over 200 hospital emergency rooms are using 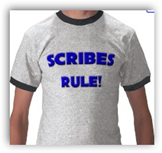 scribes.  There are 3 big companies who provide them and they were the ones providing the numbers of hospitals using their services.

The reasons cited for using scribes was due to the lack of production after the hospitals had converted to electronic medical records.  A scribe spends about 100 hours in training under the supervision of a veteran scribe and their usual pay ranges from $8 to $10 an hour and the doctors review the information they input to check for accuracy.

A few months ago I had a post whereby I stated that this is proof that the use of electronic medical records when production time is being traced and modeled, it comes to a push-shove situation as to how it can all come together.  Sometimes folks forget that there is a learning curve and in the doctor’s mind, care is first and we as patients are glad for that factor, and they have a lot on their plates today with being pulled from a few other directions too, so the scribes can help with a portion of the entry issues if needed.  Some doctors really like having a scribe too if you were to take a poll. BD

As hospitals switch to electronic medical records, doctors worry about spending more time in front of computers rather than patients. To solve the problem, physicians are turning to an age-old profession — scribes.

As Dr. Brian Lebo examined a 71-year-old woman with chest pain and dizziness Monday in the emergency department at DePaul Health Center, scribe Robert Peters stood quietly in the corner typing the woman's answers as Lebo asked when her pain started, what medications she was taking and gathered her family history. The doctor told the woman what might be wrong and what tests he planned to order.

And the scribe documented it all.

The emergency department at DePaul Health Center in Bridgeton, which sees about 60,000 patients a year, is the first to use scribes in the St. Louis area. By February, all the hospital's emergency physicians will have a scribe tapping away at a laptop or tablet computer while they work. Across the nation, about 200 hospital emergency departments have started using scribes, most within the last two years, according to the three major companies providing scribes.

Scribes are finding their place in emergency rooms