performing late state abortions and killing the babies by severing their spinal cords, so not really an abortion.  He made millions doing so and he also has a murder charge now from the death of a mother who died with an overdose of anesthetics.

The story said the Health Department has been advised of violation since 1996 but failed to respond and it was a year ago in February of 2010 the clinic was raided.  All workers were arrested too with 4 charged with murder and 5 with drug violations.  The doctor performed abortions for low income and immigrants mostly. In addition they found all kinds of awful stuff in the clinic, including jars of feet and baby bodies all over the place.  He was in practice for over 30 years and is now 69 years old.  Drug charges were what finally got authorities to investigate.  This story is one that makes anyone sick. 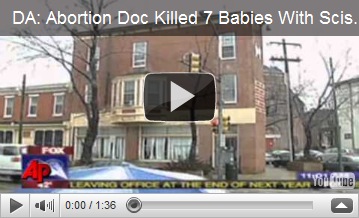 (Reuters) - Prosecutors charged a Philadelphia abortion doctor with murder on Wednesday, claiming he killed viable babies by cutting their spinal cords with scissors after removing them from mothers late in their pregnancies.

Philadelphia District Attorney Seth Williams charged Dr. Kermit Gosnell and nine associates with seven counts of murder involving babies, but said hundreds of others likely died in the squalid clinic that Gosnell ran from 1979 to 2010.

The defendants face first-degree murder in the cases of seven babies for which there is substantial evidence, Williams said. The babies were born alive and viable, he said.