The big area with using robots for the surgeon is the lack of touch and being able to feel when doing a surgical procedure, which means an accidental cut of an artery, or any other unintentional move of the robot device.  The University of Washington

is looking at Microsoft Kinect to be a potential solution here and for $150 it’s a deal.  Granted there needs to be some additional updates created such as a higher level camera and high resolution and the surgeon

In addition with Kinect, "off-limits areas," such vital organs can be mapped so the tools can't venture in to those areas and cause damage so if the device got too close it would stop functioning.  This is pretty ingenious thinking here to advance this mapping with surgical robots.  BD 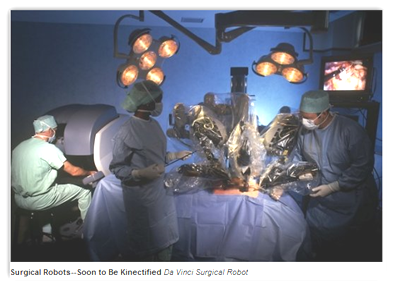 Surgical robots might allow precise operation in tiny places our unwieldy human hands can't go, but using those robots removes the surgeon's valuable sense of touch. At the University of Washington, a group of engineering students decided to use a hacked Microsoft Kinect to give that sense back.

Engineers and scientists have been working for years to fix the inherent lack of touch sensitivity that goes along with using surgical robots. The sense of touch is tremendously important to a surgeon; without it, you could easily nick an artery or drag along bone without realizing it. The solution is to implement some kind of force feedback, kind of like a more detailed version of the rumbling or vibrating you feel while playing videogames. That led this group of University of Washington graduate engineering students to one of our favorite pieces of gaming hardware, the Microsoft Kinect.