The Cytori machine sucks the cells from each patient’s fat.  In Europe a prior model machine was approved for use in breast reconstructions.  So far both in Europe and the United States there has been no FDA approvals for stem cell treatments for heart attack victims, although trials do exist like the one at Cedars Sinai in southern 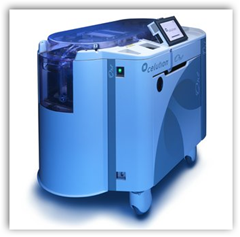 California.  The video at the link below shows an actual patient and his doctor talking about his life saving injection of stem cells.

GE has also invested in the company.

Patients will receive treatment within 24 hours of the heart attack.   A 2010 pilot of 14 patients from the Netherlands and Spain showed that the therapy was safe and well-tolerated and patients showed significantly less heart muscle damage.  In this link below from a couple weeks ago, the number of patients who had severe attacks again during follow up was cut in half.  BD

Health regulators in the Netherlands have cleared Cytori Therapeutics to begin a pivotal European trial of the San Diego company’s experimental stem cell therapy in people who suffered heart attacks.

Cytori will begin enrolling patients within the next few weeks while it continues to seek approval to recruit participants in other countries across the continent, said Christopher Calhoun, the company’s chief executive.