Back in October I wrote chapter one which talks about all types of marketing in healthcare and this article talks about co-pay coupons.  The links is worth a read as

there are some mistakes made by some in the way that they think perception may take place, i.e. Andy Griffith selling Medicare.  That’s selling an old paradigm from the past and granted I like Andy and the commercials but we all know we are not going to get “Andy” on the phone when we need assistance.

My own mother who is a diabetic went through some big time marketers driving her crazy too with so called diabetes associations telling her she needed a new glucose machine and to call Medicare to her drug store and health plant not being able to agree on her testing her sugar level twice a day, and she’s been doing this for 15 years.  No mention of what her doctor thought though, but rather preserve those algorithmic data processes of 3X a day as that means more money.

Actually this article has an insurer complaining about driving up their cost; however in Texas a company bought by Humana uses coupons for visits to their facilities too.  I guess the word here is that coupons are ok by insurance companies as long as they don’t cost us <grin>.  Humana also wants you to play games on line, why?  We are back the data for money game. 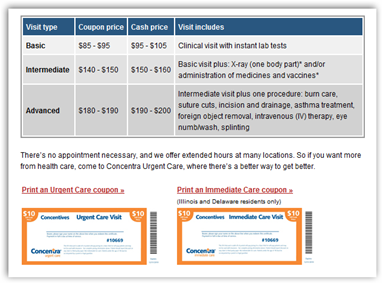 I see where the coupons can help people but if there is a generic available, why not go that route first?  Now we come back to “marketing our asses off” for sales of a premium drug.  Drug companies advertise because it works.

Sure the coupons are helping and it’s kind of sad that a consumer has to give up personal privacy in order to be able to afford their drugs at times, when there is no generic available.

If you use a drug company coupon, they know who you are and build intelligence files on how often you fill prescriptions etc. and again there’s always that doubt of not knowing who’s mining the data today.  If it’s not directly the insurance company it’s the drug company just mining away for data.

occasions to where we all do use some, self included.  The biggest waste of all is the roll of coupons that come out of the cash register at CVS and other stores which go right in the trash as I try to be as paperless as possible and I’d rather start saving trees.

If I can go and pay $4.00 cash and eliminate the co-pay crap, I am happy, but then again my doctor gets hit up as without being reported back it makes me look like a bad patient with not being compliant when that’s not the case at all.  We both laugh at it and he tells the IPA to go pound sand as he doesn’t live with me.

Again, the smartest thing to do is to check for a generic and ditch the coupons if possible as they all are out there to get data of one form or another, that is if you want to preserve a little bit of privacy.  BD

EXECUTIVES of a small insurance company in Albany were mystified when, almost overnight, its payments for a certain class of antibiotics nearly doubled, threatening to add about a half-million dollars annually in costs.

The reason, it turned out, was that patients were using a card distributed by the maker of an expensive antibiotic used to treat acne, sharply reducing their insurance co-payments. With their out-of-pocket costs much lower, consumers had switched from generic alternatives to the more expensive drug.

Drug companies say the plans help some patients afford medicines that they otherwise could not.

But health insurers and some consumer groups say that in many cases, the coupons are just marketing gimmicks that are leading to an overall increase in health care costs. That is because they circumvent the system of higher co-pays on costlier drugs that insurers use to encourage consumers to use less expensive products.

Co-Pay Coupons for Patients, but Higher Bills for Insurers - NYTimes.com